What is ED – Erectile Dysfunction?

Many factors coincide with erectile dysfunction, including:

Erectile dysfunction in men has several causes, and hormones influence many of them. Hormones help regulate bodily functions. Hormones work in concert to help the body function optimally; if one hormone is not at its optimal levels, it will affect the others. With that being said, when your body has an excess or a deficiency of a particular hormone, you can experience many types of symptoms of hormonal imbalance.

Andropause, commonly referred to as male menopause, is accompanied by low testosterone levels, which in turn can lead to numerous unpleasant symptoms, including muscle loss, weight gain, and of course, erectile dysfunction. Testosterone levels affect both the ability and capability of men to produce erections. Lowered testosterone reduces libido (sex drive) and can affect the ability to develop and/or maintain an erection.

In many cases of erectile dysfunction, sexual desire is present, but men are physically incapable of becoming erect. During sexual arousal, impulses from the brain are supposed to signal the release of nitric oxide which relaxes the blood vessels of the corpora cavernosa, allowing blood to flow through the cavernous arteries, filling them and creating an erection. If the nitric oxide is not released, like in cases of too much plaque in the arteries where nitric oxide is produced, it is difficult for a man to produce and maintain an erection.

High levels of the stress hormone cortisol could have a detrimental effect on testosterone. Prolactin, a chemical secreted from the brain’s pituitary gland, also plays a significant role in erectile dysfunction. High levels of prolactin can cause a significant decrease in testosterone levels. Overactive thyroid hormones, also known as hypothyroidism, stimulate the production of prolactin, thus diminishing testosterone levels. Low testosterone that leads andropause of men could also be caused by hypogonadism or testicular failure. This testicular abnormality creates an extreme testosterone deficiency, again, leading to impotence. 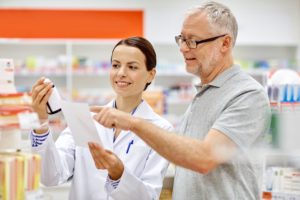 Come and partner with us today!

All you have to do is give us a call or send an email to Info@CCareRx.com.

(We do not share your data with anybody, and only use it for its intended purpose)